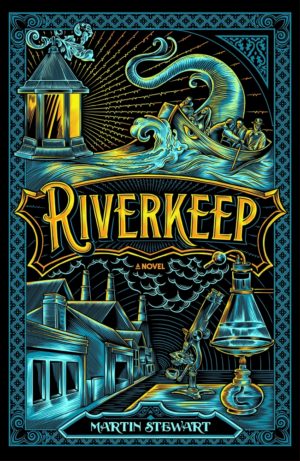 Riverkeep by Martin Stewart
My rating: 4 of 5 stars

Riverkeep tells the story of Wulliam, fifteen coming sixteen, and soon to take over the role of Riverkeep from his father. As Riverkeep, it is their job to tend it – they keep its guiding laterns lit, they stop it icing over and the they have the dubious pleasure of fishing out the corpses of the drowned.

This is a role Wulliam is physically and mentally unprepared for. And things take a turn for the worse when Wulliam’s father is attacked and possessed by a demonic sea creature. Knowing that his only hope to save his father is to hunt and kill a leviathan style creature to make a remedy, he heads off down the river. Along the way he picks up a motley crew, and they find themselves in all sorts of scrapes.

The book excelled in world building. It seemed as real as a contemporary novel, 3D and fleshed out. Stewart had obviously come up with a complex mythology, geography, sociology etc. It’s beautiful and it works, never failing to hold our attention. This was reflected in the little quotes at the start of the book, taken from imaginary tomes in the Riverkeep’s library, which Stewart went to great care to create. I could almost believe he went to the effort of writing those books before he wrote this one.

Characterisation was the novel’s second strength. Even characters who appeared for only seconds appear just as robust as Wulliam, the character who we spent the most time with. This is helped by each character’s unique voice and style of speech.

However, the characters feel a little passive – things seem to happen to them a lot, rather than anything being a product of their own decisions.

The mystery of the characters helps to propels the story. As each character is introduced onto the bata – Mix, Tillinghast, Miss Cantrell, Bonn, the mandrake – we are tempted with salacious details about their past or strange desires they have to fulfill. You keep reading in order to find out the truth.

Unfortunately, these are never quite resolved, unless a sequel’s in the works. This leaves you with the unfortunate implication that they were extraneous, which is only added to be the unfortunate fact (view spoiler)[Mix and Miss Cantrell abandon Wulliam before the final battle, leaving only the unlikely return of Tillinghast to aid him. (hide spoiler)]

Wull’s final lesson is that it’s better to do the right thing, rather than the selfish thing, even if that means letting go, and it’s a good lesson. Perhaps a few characters could have been let go of to ease a story that may be, at times, bloated like a river corpse.

The ending too comes hurtling out of nowhere, which is distracting compared to the languid pace of the first acts. But issues with pacing and characters aside, this is a very good book.

Check out my video review: