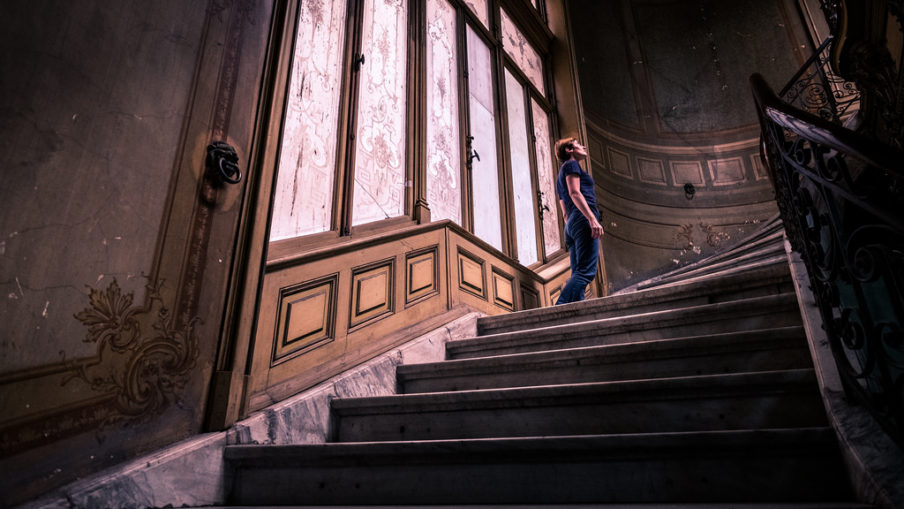 The Steward nodded to the Chatelaine. “The Baron requests that his wife call upon him at her earliest convenience.”
The Chatelaine curtsied in reply. “The Baroness informs her husband she is unwell, and declines his request. He may, however, call upon her tomorrow, when she has recovered.”

He smiled, the smallest crinkle at the corner of his lips. Not because of her message, which would most certainly upset his master, but at the memory of the woman she had once been. Of the man he had once been. The memory of two servants who did more than act as envoys of two uncompromising parties.
She turned on her heel and returned to the west wing, her unused keys jangling on her belt. He watched her go, and then made his own return to east wing, the apartments of his master, the Baron.
“Well?” greeted the Baron, as the Steward entered his study. “Does she come?”
The Steward shook his head, almost imperceptibly. He wondered when he became so stiff. “The Baroness is unwell, sir. However, her indisposition should be recovered by tomorrow, and she invites you to call upon her.”
“Absolutely not! I’m not a dog to come when he’s called. Not when called by her, by any means.”
The Steward reflected on a time when the Baron would have raced to the other side of the house when invited, not unlike an exuberant puppy. But he did not say anything.
“You have been unusually silent of late, Steward,” remarked the Baron.
“I have had very little to say, master.”
He did not add that, already a man of few words, he was starting to forget how to converse with anyone other than the Baron or the Chatelaine.
The Baron got up from behind his desk, and walked to the window. “She will have to talk to me sometime. She must have seen it, surely?”
“Undoubtedly,” replied the Steward. “Or the Chatelaine will have.”
He joined his master at the window, and the two regarded the FOR SALE sign in the garden.

She drew to a halt at the still life of the oranges, next to the third sconce from the stairwell. A point where, if the whole house was to be shorn in half by a great knife, the exact centre between the east and west wings would lie.
“The Baroness has recovered from her illness,” said the Chatelaine. “And invites the Baron to dine with her at eight of the clock.”
“The Baron is honoured by her invitation,” replied the Steward. “But finds dining at such a late hour unfavourable to his digestion. He invites the Baroness to join him for a nightcap at nine of the clock.”
“You should remind your master that the Baroness does not partake of alcohol so late in the evening. Perhaps tomorrow?”
The Chatelaine leaned in conspiratorially. “They’ve been on the grounds you know? I saw them yesterday, when I was out walking. Acting as if they own the place. It won’t be long before they’re in the house.”
“They will have to do something about it, but it will take the two of them. And they won’t be the first to speak to the other.”
“They’ll have to compromise.”
“They haven’t spoken in 120 years. They’re not likely to start now.”
The Chatelaine pursed her lips. She knew she was frustrated but, at the same time, she could only muster some vague displeasure. She was beginning to forget how to be anything other than obsequious to her mistress and diplomatic to the Steward.
“I will return to her, and see if I cannot exhort her to converse with the Baron.”
“I will attempt the same.”
He opened his mouth to say something more, but she was already gone.

“Shall I get down on my knees and beg?” offered the Chatelaine.
“If you get down on your knees,” retorted the Baroness. “Then you shall spend the rest of your existence on them. I shall speak to the Baron when he is an honourable gentleman and calls upon me first to apologise.”
The Chatelaine pointed out the window, at the great silver carriage where the labourers stored their tools, parked there for nearly two days. “There are men out there who would rebuild this house from under your feet, and you would do nothing?”
“Why don’t you do something about it then?”
The Chatelaine who first came to serve her mistress all those years ago would have told her that she had done everything in the the house for countless lifetimes and it was time that the mistress got off her widening posterior. But that woman was gone, replaced with a Chatelaine who did not do that.
“I am a servant. I do not presume to do anything in my mistress’ house without her say-so.”
“And quite right too!” she exclaimed, and beckoned the Chatelaine to fix her hair.

The Chatelaine was already there when he arrived that evening. She opened her mouth to speak, but the Steward held up a hand to silence her.
“Enough! How long have we been doing this? She’s not coming and neither is he.”
“No, she’s not. And things have got worse. I overheard them talking about selling the tapestries.”
“I cannot stand for this any longer!” he exclaimed, though his voice seemed shocked that it could raise itself to such heights.
He walked past the Chatelaine, towards the Baroness’ rooms. She supposed she should stop him, then she too strode forward, making her way to the Baron’s apartments.
“Bring him to the music room!” he called. She nodded, almost straining her stiffening neck.

The Baroness did not turn when the door opened, presuming it to be the Chatelaine. Then, catching sight of the Steward in her dressing table mirror, she jumped to her feet.
“Steward!” she cried, indignant, then her demeanour softened. “Does your master come?”
“No, mistress,” he replied. “Instead, I ask that you come to the music room?”
“For what purpose? I had hoped to retire.”
“To form a council of war, so that we might discuss the invaders. So to speak.”
“The Baron will be there?”
“Hopefully.”
“I will only go if the Baron goes.”
“And no doubt the Baron will only go if you do, mistress. But one of you must break this deadlock, or the whole house will fall.”
“Absolutely not! I shall never….”
“They talked about selling the tapestries.”
“Bring me my shoes,” she commanded.

The Steward entered the music room first, lighting the way for the Baroness in her elegant gown. He retired to the corner, next to the Chatelaine. The Baron sat at the piano that he could not play.
“How did you get him down here?” asked the Steward.
“I lied,” replied the Chatelaine. “I told him she was on her way down here.”
The Baroness took up position by the fireplace, resting her arm against the mantel. Husband and wife regarded each other warily. Their servants were very aware that it had been many years since they had last seen each other. A chance meeting in the orangery had soured the whole house for a decade.
“We have a problem,” began the Steward. “The house is slowly being taken over by a force that wishes to be rid of us.”
“And what do you propose that we do?” asked the Baroness. “What do ghosts do when the living move in?”
“Haunt the place, generally,” replied the Baron.
“Haven’t we done that already?”
“In the Year of Our Lord, Nineteen Hundred and Seventy-Eight,” proffered the Chatelaine in answer. “The newlyweds, when they thought to make an inn of this great house.”
“Oh yes!” The Baroness clapped her hands and shared a gleeful look with her husband, before her icy glare returned.
“This lot look made of sterner stuff,” said the Baron. He did not mention that it grew harder for him to grip anything that was not in his rooms. He had already forgotten the touch of glass.
“There is, of course, another option,” said the Steward. “We could abandon this earthly plane, and choose a more appropriate residence.”
“And tell me,” said the Baroness. “How does one do what we have failed to do in nearly four hundred years?”
“Well, the Chatelaine and I had previously done some reading, and we have a thought on that, sir, madam, if we may.”
The Baroness inclined her head, and the Chatelaine took that as an invitation to speak.
“Ghosts remain on this earthly plane, when they have unfinished business among the mortals.”
“And,” demanded the Baron. “How do we know that it is not your unfinished business that causes us to linger here?”
The Steward answered for her. “We…we have no business of our own, sir. Your business has, and always will be, our business.”
“Isn’t there something?” prompted the Chatelaine. “Something that was never quite resolved when your Graces were alive.”
“The dinner,” said the weary Baron. “That the only thing we haven’t talked about. When we…you know.”
They had been arguing over the dinner when the plague had swept though the valley, and laid waste to the tenant lands. The servants fled, taking what their pustulant hands could carry, and left their masters to cough themselves to death. All alone, save their two most senior and dedicated servants.
The Baroness breathed her last, whispering about partridges. The Baron followed suit not long after. The Chatelaine and the Steward arranged their bodies, packed up the house and discussed where they should go next, but then the blood trickled from their noses, and they knew they would go no further.
The next day, they had awoken to the sound of the Baroness screaming for her breakfast and recalling them at length about the Baron’s shameful, embarrassing behaviour. She still screamed for her breakfast, but only once or twice a century. She would, however, regularly bring up the embarrassment she had felt.
“Then, dear husband,” said the Baroness. “You need only apologise to me, and we shall put this whole business to rest.”
He leapt to his feet from the piano stool. “Apologise to you! Apologise to you! You invited that absolute cad LaForte! You know I can’t stand him!”
“It is a lady’s prerogative to invite guests who liven up her table! And you, with those partridges. I have never seen such abuse of a red wine sauce. All over the table cloth. And the smacking of the lips and grinding of the teeth! It would put the Devil to shame!”
“Listen here, you shrew, if man wants to enjoy his food at a godawful dinner…”
“You listen to me, you ill-mannered boor!”
“Boor? You’d still have been freezing in that draughty castle if it weren’t for me.”
“Shrew? I raised this house from the squalor in which it was mired!”
Then for effect, she swept the carriage clock from the mantel. It crashed to the floor, breaking into pieces. The Baron slammed the lid of the piano down, and the two great nobles raced to be the first to exit the room. The Baroness was quicker by seconds and made it out into the hallway. They continued to argue as they made their way to their separate rooms.
From the downstairs bedroom, a panicked voice could be heard. “Tom? Tom, wake up. I think there’s someone in the house.”
“So, we have resolved nothing,” said the Steward.
“Perhaps they will not be too noisy, and we can have a peaceful eternity,” replied the Chatelaine.
Ha, a peaceful eternity, thought the Steward, was one apology away. Yet still they lingered. He turned to bid the Chatelaine good night.
“I will see you then, tomorrow, by the still life of the oranges…”
“Next to the third sconce from the stairwell,” finished the Chatelaine. “And we can reflect on where our absolute loyalty has gotten us.”